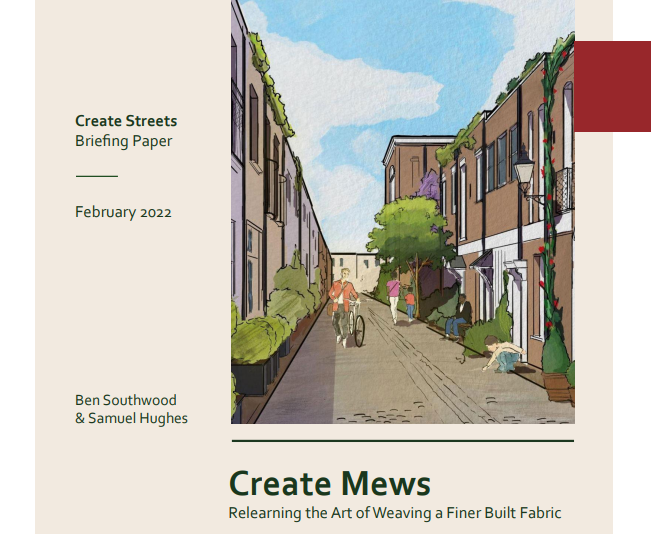 Create Mews is a major contribution to policy debate in the UK, developing the ‘street votes’ concept to create a policy tool that enables small communities to build new mews where they decide this is appropriate and desirable. Mews are inherently a walkable and sustainable typology, and are in practice often extremely beautiful, popular, and well-photographed.

The paper, which has more than 50 endorsements from major community figures, explains:

As Sir Simon Jenkins comments in his foreword:

Today’s towns and cities do not have to be demolished to house more people. It is wholly unnecessary. The greatest—and most costly—domestic policy failure in 20th-century Britain was a belief that only through replacing old towns or building new ones in the countryside could the nation expand and prosper. The popularity—and adaptability—of old streets, old houses and old neighbourhoods was of no account. Modern living required tower blocks, slabs and car-friendly ‘estates’.

I therefore see this report as a truly revolutionary manifesto, heralding the rebirth of a new British urbanism. We need only to harness the spirit of enterprise of a new generation of city residents to gain more living room. It is a revolution that may have come too late for many lost places and lost communities. But at least it has come.