Benedict Wharf - the first test of "gentle density" in London

Pick up any article about the Government's views on planning and you'll find it hard to miss an emphasis on "beauty", "gentle density" and "community engagement". As with all public policy the acid test lies in its delivery. This is the story of the first test of "gentle density" in London.

Benedict Wharf has been a waste management site in Mitcham, south London for as long as anyone can remember. Following a long local campaign against the noise, smells and heavy lorries its current owner SUEZ bowed to the inevitable and found a new site nearby where it can operate 24/7 without disturbance. SUEZ promised the local community it would leave a legacy to be proud of. It drew up outline plans for Benedict Wharf's future. As the local civic society we began early discussions and they started well. Close collaboration resulted in a draft Local Plan allocation for housing. After some persuasion community workshops were then organised to develop proposals for an outline planning application. The community expressed its preference - for the site to be developed as a mixed use, natural extension of Mitcham based on streets and houses. So far so good.

The first plans which emerged pushed these community preferences to the limit. 600 homes rising to eight storeys in low rise Mitcham owed little to local character and provoked protest and concern. Then the Mayor of London got involved and local anxiety turned to anger and disbelief.

Without even a hint of local engagement the Mayor dismissed the plans for being "sub-optimal development of the site". Despite the London Plan's clear requirement for a "design-led approach" he demanded more homes and a larger development as a quid pro quo for allowing the land to be repurposed from industrial use. His intervention also expected more of that unaffordable affordable housing with which we have all become very familiar.

SUEZ went to ground and drew up new plans behind closed doors for 850 homes rising to 10 storeys. These were unveiled at public exhibitions with less than two days notice. SUEZ told us the community couldn't change the plans presented. Any pretence at engaging local people was laid to rest and a familiar barrage of technical reports sought to justify the unjustifiable.

The damaging impact on the Conservation Area became clear. Residential blocks towering over two storey locally listed terraces were described as having a "moderate and neutral" impact" and the Heritage, Townscape and Visual Impact Assessment concluded that the new plans "would not result in any change in the effects on the visual receptors or representative views" despite a 25% increase in height. Local residents were left bewildered by how such "expert" reports manipulated the truth. The Mayor's intervention also had other damaging consequences, including more single aspect flats in further conflict with the London Plan.

Local voices were heard when the outline application came before Merton Council's Planning Applications Committee. This rejected the plans. All three ward councillors have also objected and the pro-development local MP (known for wanting to build on the Green Belt) has described it in an unprecedented intervention as "an extraordinary overdevelopment of the site".

Now the Mayor of London has stepped in to make the decision, acting as a local planning authority while taking no meaningful responsibility for engaging with community interests and concerns.

Which brings us to "gentle density" and why the fate of Benedict Wharf matters to all those who care about the way London develops. The Mayor faces a decision based on a London Plan recently amended by the Secretary of State such that "Gentle densification should be actively encouraged by Boroughs in low- and mid- density locations to achieve a change in densities in the most appropriate way” (Policy D3). No-one is disputing that Mitcham is a low-and mid-density location and no-one is claiming the 10 storey plans to be gentle density. They are anything but.

The Mayor has a decision to make. Back gentle density or ignore local views and damage the London Plan. If the Mayor cannot make the right decision then the spotlight turns onto Robert Jenrick. We have asked him to call-in the plans. They fly in the face of the Government's commitment to "gentle densification". As the Mayoral elections draw close they would also set the most damaging precedent at the very start of the new London Plan period.

Tony Burton is writing in his capacity as Secretary of the local civic society, Mitcham Cricket Green Community & Heritage

You can find out more about the Benedict Wharf plans here 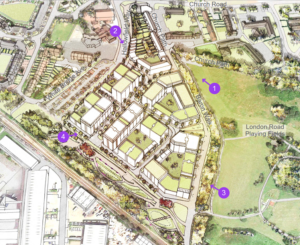