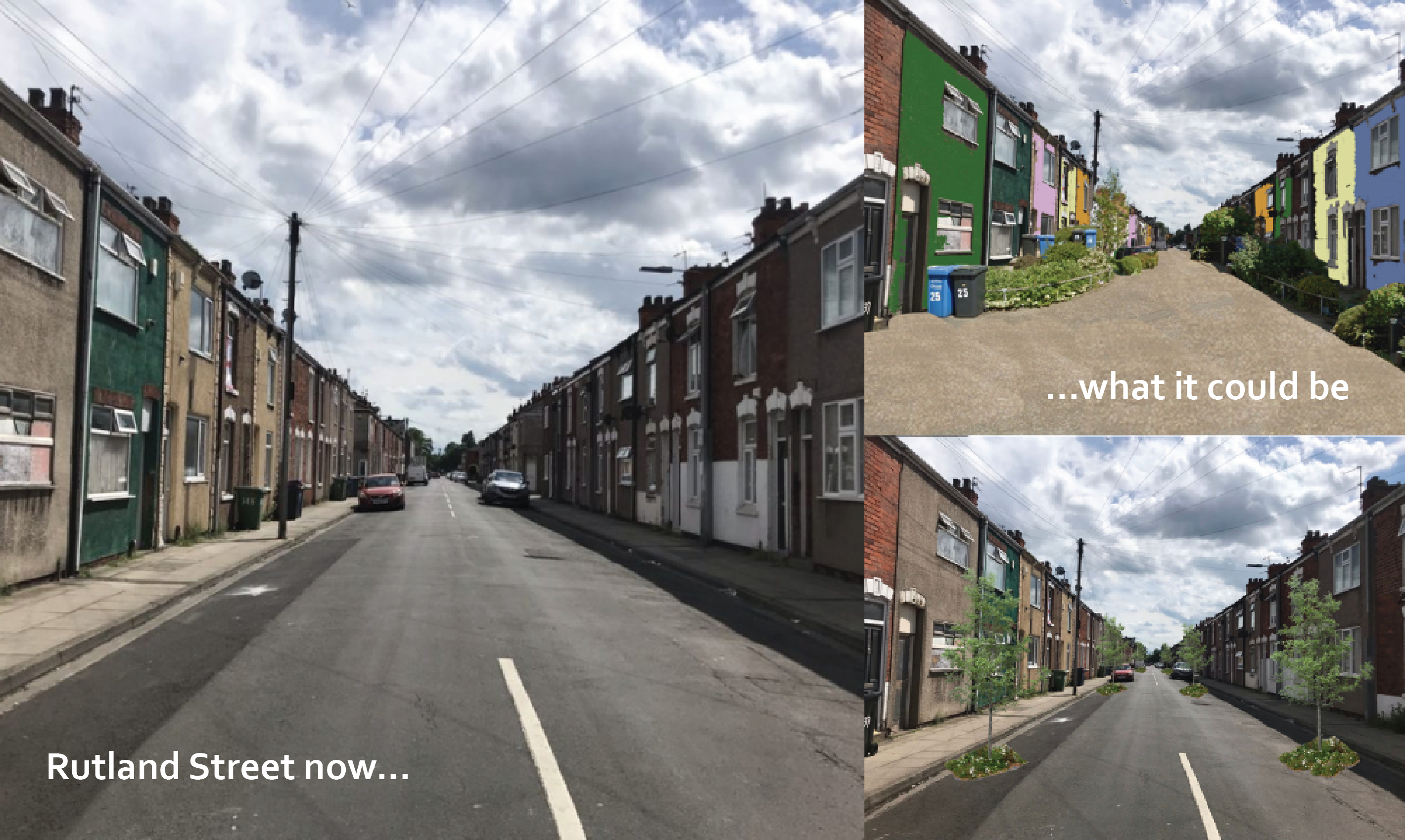 Since 2020 the team at Create Streets have been working with East Marsh United (EMU) – a community group in Grimsby, North East Lincolnshire. EMU’s founder Dr Billy Dasein wrote this article in response to recent violence outside his front door, on Rutland street. The East Marsh is an area of multiple deprivation and could become, we hope, a case study for Levelling up. Billy talks about EMUs many initiatives for the area, as well as one that we are working on together Greening Up Grimsby.

EMU applied to be a Create Streets Foundation Place Champion in 2019 and through that programme we have been working with them on the best ways to improve their place; make it safer, make it more beautiful and ultimately make it a better place to live. We identified 2 priorities – cleaning up and painting houses and planting street trees along Rutland St.

Greenery, little and often, is one of 8 principles we at Create Streets advocate for Designing Popular Places and after many a frustrating hour applying (and then re-applying) for funding we now have a plan, a team and some money to start greening up the now famous Rutland St and adjoining park. Greening Up Grimsby starts with a community co-design and planting day in January. Please help us help fund East Marsh’s bid to make it a better place.

‘Murder Mile’? No thanks! East Marsh United are building a better future – for generations to come

.
I was born in the same house in Rutland Street that I live in now. The East Marsh is my home. So, when our local newspaper reported the disturbing incident of a ‘drive-by shooting’ as being from ‘murder mile’, I was pretty annoyed. The term ‘murder mile’ was familiar to me as coming from the very same newspaper a few decades ago and I remember my old dad, East Marsh born and bred, using the term in self-mockery on many occasions. I’m part of East Marsh United (EMU), we’re a community group in the East Marsh of Grimsby and I’d like to share some of the things we’re doing to challenge such thoughtless labelling and build a hopeful future for generations to come.

This weekend a group of us from EMU were out picking up litter in the park, talking about the incident in question and about the article. These are some of the conversations we had and some of the things we are doing to build a brighter future for the East Marsh.

Bringing the good people of the East Marsh together

Josie Moon, East Marsh resident,  “We had been out for the evening and got back to see the police cars across the street on the next block – and there were people out chatting on their fronts, everybody was very calm – people were like ‘shit happens but we’re all alright’. Seeing people out on the street and talking to each other, we need to do that more. But, to refer to a street as ‘Murder Mile’ demonises the residents and undermines community cohesion – it’s our street, our home, together.”

EMU host regular ‘kitchen table’ events where people just turn up and sit with each other for a few hours, simply being in each other’s company – and perhaps have a laugh about living on ‘murder mile’.  We also host the East Marsh Peace Choir most weeks, where we are often deeply moved by the simple act of singing together.

According to Rev Kay Jones “It starts with the housing – if people feel secure in their home and know that they have neighbours who care and landlords that care, then there’s security. What EMU (East Marsh United) are doing to change the housing balance will bring a better heart to everything. And then you have to think about this (EMU picking up litter together in our park on Saturday morning) – people who probably otherwise wouldn’t get together. But, we’re together because we all care about the park and what goes on in our neighbourhood. The possibility of bad things happening is reduced by the presence of good people, which also helps build positivity in the community.”

EMU have bought three houses in Rutland Street, completely refurbished, everything new, and we stand with our tenants as an ethical community landlord. We raised £500,000 in the summer to buy more houses and aim to buy ‘100 Houses for 100 Years’ maintaining community owned housing for generations to come, for our children and our children’s children.

Making our neighbourhood cleaner and greener

Community Artist, Sarah Palmer: “I spend a lot of time working on the East Marsh and there’s a lot of really positive things that get under-reported or overlooked. The kind of reporting here doesn’t do the town any good because people from outside the area won’t want to visit – and look at all these people, these kids, out on a wet and windy Saturday morning coming out to clean their park because they care about it.”

East Marsh United (EMU) are working to help people become stewards of our neighbourhood by meeting regularly and cleaning up our park. We now have the support of the Council, Create Streets, Cadent Gas and the Urban Street Tree Challenge Fund to plant 30 new trees in the park and a further 30 along Rutland Street. As part of this new Greening Up East Grimbsy initiative we will be holding a community greening up day in January, asking the community to choose types of trees, bid for locations and get stuck in with the digging. Not only will new trees brighten up the environment for all those living in East Grimsby they will also help reduce speeds along Rutland Street

Community Wealth Building – coming together to sort out our problems

Terry Evans lives a few doors away from the site of the incident and says “It was a one-off, you get trouble on the street, but nothing like that – and I don’t know anybody round here who is particularly concerned about it. The article gave the whole street a bad name, residents a bad name. ‘Murder Mile’? It’s new to me, it’s absolutely ridiculous and gives people the wrong impression – it’s nowhere near that bad. East Marsh United are trying to bring people together to understand the problems and sort the problems out ourselves as nobody else seems to know how to.

EMU are working with friends from community groups, business, politics and academia to promote Community Wealth Building across Grimsby through projects in housing and employment but also what we’ve called ‘The Coming Generation’, promoting the unheard voices of young people and trying to create a place where young people feel secure and want to stay and make a contribution to their town. We also have good relationships with our schools, working with kids in park visits and on projects such as the wonderful East Marsh Anthem.

The night after the ‘drive-by shooting, EMU hosted ‘The Happening’ at Freeman Street Market.  Around 60 people came along, from age 5 to 80 to share songs, poems and to be together for an evening of joyful, creative celebration. Entry was free but people brought donations of food for the We Are One foodbank. We needed two cars to transport the food that people gave. They donated out of love and compassion for their fellow citizens, for those with less than them. Our event ended with the audience and performers dancing and singing together, and there were many hugs and a reluctance to go home at the end of the night.

That is the East Marsh, that is our community.

We are planting seeds in our neighbourhood and all seeds need the right conditions to flourish and grow. If all we ever hear are bad stories, where’s the hope, how can we change things for the better? Our world is a difficult and confusing place of late and here on the East Marsh, EMU are challenging negativity by building hope – here, where we live – and it makes me proud to be a part of our loving, welcoming, forward-looking and fantastic East Marsh community.

Find out more about East Marsh United from our website – and perhaps join us to help build a better future (membership is just £1 and this gives you informative emails, invitations to our regular meetings as well as voting rights at our AGM): eastmarshunited.org