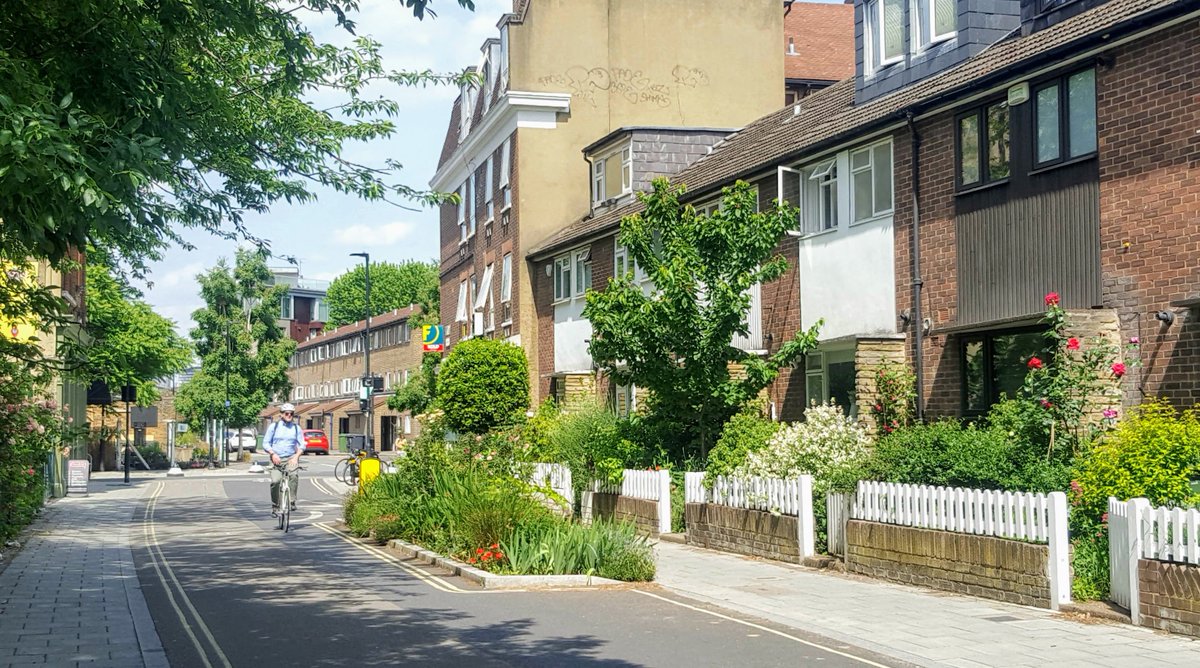 Road use is a paradigm example of the famous ‘tragedy of the commons’. Most goods have prices, so consumers think twice before using them. When goods are free at the point of use, like roads, people tend to consume more of them until a queue forms. In the case of roads, that queue is quite literal: traffic congestion.

In extreme cases, this is true even with walking: in an extremely busy city like Venice, with narrow streets, one must often dodge around or wait behind other pedestrians to walk the city. Unbearable ‘pedestrian congestion’ is a reason why people avoid Venice at peak seasons.

The busiest bits of the City of London can be like this too. Indeed, when London was largely a pedestrian city in the nineteenth century, the authorities of the times would actually ‘drive’ new streets to deal with congestion from carts and walkers. Shaftesbury Avenue was created by Sir Joseph Bazalgette between 1877 and 1886, demolishing a chunk of city fabric to relieve traffic.

Cars cause more challenges in this respect, principally because they take up so much space relative to the person they are transporting around. Sixty five per cent of cars are occupied by just one person—the driver—and even a fully-occupied car takes up around twice as much space as its five passengers. What’s more, the true space needed for cars is several times larger, because of stopping distances, necessary road markings and street furniture, and the fact that cars generally sit parked and unused for ninety six per cent of their lives.

When a person decides to walk along a street, rather than stay at home, they impose a tiny cost on society: that small space taken up by them as they walk around. When a person decides to drive, they require an enormously greater space along the road, a space that no one else can safely move into. (This space cost comes in addition to the greater danger and air pollution they create relative to pedestrians.)

Journey volume is not a fixed thing. We can decide to get our food delivered, as in the 1920s, we can pick it up on the way home from work, we can do a ‘weekly shop’, or we can drive to get it when we feel like it. Each of these decisions will have different effects on traffic.

This means that cities which attempt to cater for free movement of cars tend to fight a losing battle. More and more space is turned over to roads and parking; but if roads are free at the point of use, this infrastructure stands empty most of the time, and is nevertheless heavily congested in ‘rush hour’.

One option is depopulation of the city, and resulting loss of the city’s enormous benefits of agglomeration, which raise productivity and wages. That depopulation was seen in Britain (and, to a much greater extent, the USA) between 1945 and the 1980s. Although this imposes a terrible economic and social cost, it does, in a way, solve the problem: at low population densities, it’s possible for almost everyone to move around conveniently in a car on their own.

However, since the 1980s, British (and American) cities have experienced a remarkable renaissance. Inner city populations have consistently climbed from the nadirs they reached in the 1970s to 1990s. More and more central areas have been returned to pedestrians. The tram networks that were ripped out in the 1950s have often seen some restoration, or new metros have been built. And cycling has become a major mode of transport again, almost a century after cyclists started to cede the roads to drivers.

In fact, in the last year cycling rose almost fifty per cent, according to the Government’s Gear Change: One Year On paper. The magnitude of this rise is presumably due to Covid, but it is part of a longer-term recent trend towards many more cycling journeys—albeit not quite back to the interwar levels of more than ten million regular cyclists.

The paper looks back at a year of the Government’s cycling strategy, which is based around an understanding of the spillover effects or ‘externalities’ of different transport modes. Bicycles are small, so they don’t require enormous reorganisation of city spaces, nor demolition of historic districts.

As with all Government papers, there are a range of policies: cash for authorities doing things they like, pilots of interesting schemes, warnings to councils that don’t play ball, and more. But one thing of particular interest is the response to Low Traffic Neighbourhoods (LTNs).

Notwithstanding the rise of cycling, the revival of the city has put immense pressure on roads. Queueing is an inefficient way to portion out road use, since when traffic gets sufficiently high everyone moves more slowly and the total ‘throughput’ of the system falls—i.e. fewer people can get where they want to go. What’s more, road space is rationed to those who mind queueing least, not those who are most keen to travel. Economists often suggest road pricing to solve this, but it has been so far impossible, outside of isolated examples, to develop politically viable nationwide road pricing systems.

Low Traffic Neighbourhoods are a remarkable innovation which close certain streets to cars, to prevent ‘rat running’ of residential neighbourhoods without making it impossible for locals to drive in and out. Since the rise of Google Maps and other satnavs, everyone in the UK has effectively gained The Knowledge of a traditional black cabbie—and some have gained even more from apps which warn of congestion and accidents in real time. This has raised the overall capacity of the road network and facilitated much more driving, but done so by making previously quiet residential streets noisier, more dangerous, and busier. LTNs are, in effect, a regulatory and localist version of road pricing.

LTNs have appeared to be intensely controversial. There are a range of Facebook groups, like “Horrendous Hackney Road Closures” set up to organise protests and complaints against them. Many councillors in local oppositions have taken them up as causes celebres. Those who object generally complain that their commutes have become longer or more difficult due to the ‘modal filters’ keeping out through traffic. But, by and large, they have not been overturned. It seems the silent majority favours keeping them in place.

As with most changes, residents are not sure beforehand. But according to Gear Change: One Year On, polls after a period of bedding in have come out two to one in favour of retention. This is perhaps unsurprising, since LTNs naturally reduce accidents, noise, pollution, and apparently even crime—through the ‘eyes on the street’ effect. And LTNs have not simply redistributed traffic around. Boundary roads have seen reduced traffic in most schemes. Instead, people have made fewer short journeys by car, and more by healthier, more climate-friendly modes of transport.

In the recent London mayoral election, Shaun Bailey proposed that LTNs should only be retained where they are approved by plebiscite. The Government implies, in Gear Change, that it agrees, and that where polling shows that they are opposed by a majority, they can be revoked. The evidence so far suggests that such polls would go heavily in favour of keeping traffic calming measures in place. Good.

Ben Southwood is Head of Research at Create Streets.